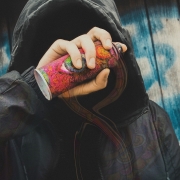 The situation is perfect; street light is out “I guess the city doesn’t care” Jonny thinks. After 3 days the huge bubble spray bomb or throw up is still on the wall.  No security to come around for at least 30 minutes or bushes in the way.  Down goes the back pack and out come the spray cans, four or more.  He needs a lot of paint to fill in this thing that takes up almost the entire wall.  Tonight, his message is his name, or moniker, and his crew.  He starts to craft his message filling in the bubbles with blue, red and black paint.  BTW, these are some of the most difficult colors to get off the wall.  He knows it too.  His crew uses the “crew colors” red, blue and black; it is an identifier for them and also for longevity.  He sees partially removed graffiti all over the place and they just can’t get these colors to go away completely.   It seems like an impossible feat.  Because of this he thinks, “We win”.

Who is this guy?  Who is this crew he talks about?  Why is he taking such risks to vandalize a wall?  Why do taggers tag?  You’ve probably wondered this when you pass graffiti in your neighborhood or out and about.  You probably wonder how they get up on that really tall sign over the freeway to tag it up with a mostly unrecognizable name or message.  Having been in the graffiti removal industry for 17 years I’ve learned a lot about it.  Here are some factors that contribute to this mostly unstoppable phenomenon.

Who are these Taggers?

Before we look at why let’s take a look at who.  Most graffiti taggers are adolescent males aged 12-21. Graffiti taggers cross all socio-economic lines.  Also, they see themselves as outliers or outcasts.  These kids want the same things we all do and they are not getting it in their home life or at school.

Who doesn’t want respect and recognition?  Simply put, we are wired for it as social beings.  Well, graffiti taggers want it too.  However, unlike the majority of us, they have not been able to affect this for themselves through more main stream means.  You know, like sports, music, civics, chess club.

They find what they seek in their crew.  Respect and recognition come from taking risks.  For instance, spraying huge graffiti tags on a wall or throwing up their message in a well lit and populated area.  Some of them will also go up and onto that freeway sign you see going through down town.  Doing that gives them a lot of currency.  And they can run fast.

Our tagger Jonny took some risks by creating a very large piece of graffiti, in an area patrolled by security and in plain sight.  He will get some respect.  He will get fist bumps and pats on the back.  This will feel good just like any of you who get props for a job well done. It feels good to be recognized by your peers and be part of a team.

Speaking of team, graffiti taggers don’t always go it alone.  How do we know that?  Well we see them for one.  For two we read it in some of their graffiti spray bombs.  Really, if you’ve been looking at graffiti as long as I have you would be able to read a lot of it.

Working as a team, members of the crew will act as look outs for their fellow tagger.  Security, police or just anybody who could interrupt their work are threats.

Some graffiti taggers aspire to become graffiti artists.  Graffiti art has become hugely popular recently.  We’ve seen it in advertising.  Also, many metropolitan areas dedicate swaths of street scapes for graffiti artists who create murals that mostly don’t get covered in the unsightly graffiti we usually see.  Respect and recognition.  However, this graffiti art is sanctioned and even celebrated which is great and great for the artists.  Many believe that this describes the difference between graffiti art and graffiti vandalism; permission.

Most graffiti taggers, who don’t aspire to be artists, (which is the majority of this group) don’t want permission.  That would partially defeat their purpose.  Getting their spray bomb up onto the wall without permission or anyone catching them is some of the currency in their world discussed here.

Their messages are as many as you or I have to be expressed.  A tagger or crew’s moniker says “We are here”.  Much like Jonny’s crew.  Kind of like pissing on a fire hydrant but I didn’t say that.  It is not the same way that Gangs stake their territory.   Many people believe that any graffiti is Gang graffiti.  This is not the case.  A very small percentage, 10%, is recognized as Gang graffiti.  A Gang’s graffiti is functional.  It is not only to claim their territory but also to be seen in other Gangs’ territories.  That is why it can be read.  It is a threat.   Sometimes you will see this threatening “conversation” play out on the wall when Gang members spray over each other’s menacing expressions.  This graffiti is more akin to chest beating.

Some messages are political “Kill the state” or “No more Trump”.  Some are social expressing anger or need, for instance “F—k Jeff Bezos” or “More homes 4 homeless”.  Some are well, we just don’t know. For some graffiti taggers their expressions of frustration, anger and angst are seen by them as privileged.  Why?  If you put yourself in their place think about who they are.  If they come from a middle-class back ground their concept of privilege is most likely engrained in their upbringing.  If not, their sense of power and outlet for expression is so limited it is understood that it’s fine to vandalize other people’s property.  But they don’t all see it as vandalizing.  It’s being seen.

I have empathy for these kids.  If you distill it down to its essence they want to be seen.  They want to be recognized.  Realistically graffiti will never go away but we can all do better at listening.   And like the Beatles said, “All you need is love”.