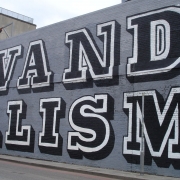 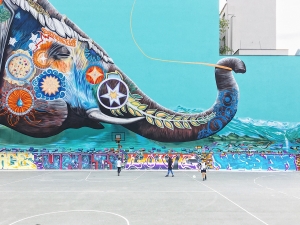 My sisters and I take an annual trip together to visit and explore an American city.  We’ve been to Santa Fe, San Antonio, San Francisco and Denver.  We do A LOT of walking.  One our favorite activities is visiting the public art each city has to offer.  Each city has its own unique story to tell through it’s public art.  The age of the art, the artist(s), the materials used and the amount of it sheds a light on the culture of the people who live there.  I find it fascinating and rich.

In recent years I’ve seen a noticeable expansion of public art in the form of murals.  Some cities have dedicated corridors of this art.  The wealth of styles keeps me looking for more.  I see murals that embody a painterly style and some remind me of the 60’s pop culture.  Of course, there is a lot of art in the style of graffiti by artists who have taken its form to a new level.

In researching where this art has sprung from, I’ve found many city public mural programs.  These programs alone, or with strategic partners, have used the art not only to inspire but to elevate neighborhoods that have suffered from the effects of social disorder.  Graffiti vandalism being one.

Murals have their powerful place in the endless campaign against graffiti vandalism.  However, all graffiti vandalism cannot be covered up by murals.  So, what else are city governments and citizens doing to manage it?

There are several tools city governments use to help combat graffiti vandalism.  Here are some:

I’d like to provide an overview of these valuable programs that used in concert can have a valuable effect on communities.

Many cities have laws on the books that address graffiti vandalism and its removal.  Ordinances punish graffiti vandals for defacing public and private property.  These punitive laws hold taggers responsible in the forms of restitution and/or incarceration.  If the tagger is a minor, parents and guardians will also be held responsible.

Many cities include in their ordinances time frames in which graffiti has to be removed.  These time frames make the property owners responsible.  If this sounds like a raw deal maybe it is.  However, the method of removal is not stated so the property owner can solve their problem any way he/she chooses.  Usually the penalty for not adhering to time frames are daily fines.

Nothing like stating the obvious.  Laws mean nothing without enforcement.  Some cities employ Code Enforcement Officers, some cities depend on citizen involvement to report it.  The graffiti would be reported to law enforcement (maybe even dedicated staff) and the owner notified.  Either way this is a reactive approach.  What I mean by this is the graffiti would be sitting there until an officer sees it or someone who cares enough calls it in.  Graffiti begets graffiti.  The longer it sits on the wall the more it collects.

I’ve worked with Task Forces that are made up of the citizens (usually business owners) of a particular neighborhood.  I’ve also been involved with Task Forces comprised of city officials (police, code enforcement, neighborhood liaisons) and community members such as business owners and professional graffiti removal specialists (LIKE US!)  The value of having graffiti removal businesses at the table is that when certain taggers and crews are identified the people who remove it can supply locations where the graffiti has been created.

All of these groups have similar agendas; to keep graffiti off their properties, to catch taggers in the act of vandalizing, to debate restitution, assist law enforcement, coordinate events among others.  I think task forces are a really good thing because it brings people with different perspectives together.

This aspect of enforcement concerns itself with the apprehension of taggers and further reinforcement of city code.  Again, professional graffiti removal businesses can play a part here by sharing locations where identified tags, or monikers, have been recorded.  This can help with apprehension and restitution efforts.

There are many types of public programs.  In cities without ordinances that address the creating and removal of graffiti vandalism tend to expend little effort in its eradication.  But don’t be dismayed.  There are cities that employ robust strategies to manage their graffiti problem.  Here are a few:

As discussed above public art in the form of murals is another very successful way to combat graffiti vandalism.  Many taggers aspire to be artists.  These venues can provide opportunities for artists to showcase their work and do something very positive for the community.  If the murals are protected and maintained from vandalism even better.  Murals don’t often get tagged but it does happen.  Having a plan in place to maintain these highly visible public areas make sense.

Any one of these strategies alone cannot overcome the ubiquitous nature of graffiti in our cities.  As I say in all of my articles; graffiti is a generational issue that will never go away.  But all is not lost.  Dedicated, strategic, creative long-term plans that include professional removal solutions can help manage it.

Why do Graffiti taggers Tag?